How Do Electrical Transmission and Distribution Systems Work? Find Out. 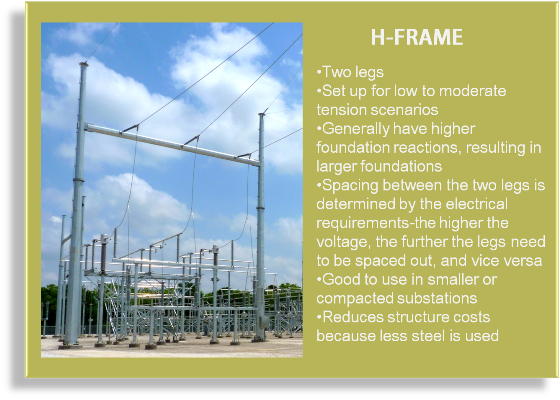 A Transmission and Distribution (T&D) System, has a notorious job of delivering electricity to consumers 24/7, 365 days a year.

But before the electricity can travel into your home, it must pass through a substation first. A substation is an assemblage of equipment where electrical energy is passed in order to be stepped up or stepped down.

Inside a substation is like its own unique “power world” where every pole, bolt, stand, surge arrestor or structure plays its own individual role.

The three main types of structures found inside a substation include:

Dead-end Structures are where the line ends or angles off. They are typically constructed with heavier steel in case they are needed to carry heavier tension. The two most common dead-end structures are H-Frame and A-Frame structures. 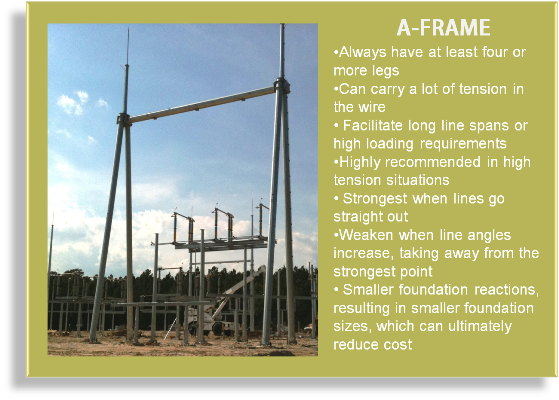 The second structure, a Static Pole, is a single, free-standing pole that creates a shield to protect all of the equipment inside a substation from lightning. Static poles may or may not have overhead shield wires attached to enhance protection. It depends on the size of the substation as to how many static poles are needed.

Bus Supports are the most basic structure found inside a substation. Its main purpose is to provide support for rigid bus as it travels though the substation. Rigid bus is stiff and will not move around during weather events. Unlike rigid, flexible bus is typically used in high seismic areas in order to be able to move and dampen the seismic forces that occur.

Electrical equipment can be of significant weight and must meet specific guidelines for structural loads, deflection limits or clearance requirements.Equipment Stands are the structures that the actual equipment sit on.

Examples of some equipment stands include:

So, although the concept seems quick and simple like flipping a light switch, much more is going on behind the scenes.

Transmission lines act as the utility interstate system where electricity is transmitted at high voltages in order to reduce the energy lost in long-distance transmission.

Although it’s hard to quantify structure types since there are always exceptions to the rules and never-ending configurations, transmission structures can be considered dead-end, strain or suspension.

Each structure type can either be classified as tangent, with no line angle, or angle, when there is a line angle.

Steel transmission structures can be designed with tapered tubular poles, which are hollow, can be multi-sided and have a large base that tapers down, typically in the range of .18 to .45” per foot.

And to dig a little deeper, all of these structures can either be guyed or unguyed. A guyed structure provides extra support by fastening a wire from the structure to the ground or another structure, whereas an unguyed structure is self-supporting.

When deciding which type of structure is most economical, as well as best suited for varying conditions, there are many considerations that can influence which to select, such as:

We proudly announce that the Crest Industries Family of Companies is officially carbon negative for...

New ventures bring new adventures. In September of 2020, DIS-TRAN Steel announced the opening of a...